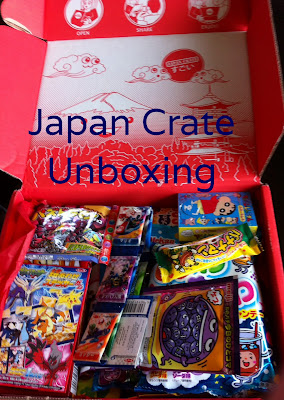 During my Summer vacation I discovered a very cool site while Googling for weird Japanese candy commercials (because aside from mostly reading, that's another of my hobbies), and ended up discovering Japan Crate. Many of you may have heard of it, since there are many Youtubers and Bloggers who have reviewed or talked about Japan Crate. If you haven't heard about them please do check out their site: japancrate.com. I got this crazy idea, what if I asked if I could review their candy, and I could try blogging about something different just to try it out!? I e-mailed them and got a response two days later saying that they would love to send me a Japan Crate! They were super friendly, and if I had any questions they responded within a day or two. My Japan Crate came a few days ago so without further ado, this is my review, and my completely honest opinion. (BtW I am using a very reliable system to explain much deliciousness or grossnes a product contained called snack stars. Here is the guide to snack stars:

5 snack stars: Something that should belong on a list of 1,000 things to eat before you die.
4 snack stars: Makes my mouth water thinking about it. Worth trying.
3 snack stars: Pretty good, except a bit average. Would still choose it if the shop was out of my 5 and 4 star snacks.
2 snack stars: Okayish, just did’t like it that much.
1 snack star: Never ever ever trying this again. Not worth it…

Crackling Cotton
Crackling Cotton tastes like a combination between Pop Rocks and regular cotton candy. When I opened the package the first thing I noticed was the fruity aroma of grape which just smelled so yummy. Anyways, I teared the light purplish/ pink cotton candy (which looked and had the texture of well, cotton) and when I did I noticed that there were tiny white and slightly larger purple pieces wedged inside the candy. The white pieces (which looked like slightly larger pieces of sugar) were very sour, while the purple pieces ( which looked like hollow crystals) popped when you bit into them like Pop Rocks. The cotton candy itself was really fluffy (fluffy unicorn!) and seriously tasted a lot like grapes in a Jolly Ranchers type of way. Four snack stars! I took one star away because while it tasted great, the candy itself was aesthetically a bit crumbly and I think it would be better if the cotton candy was in some sort of shape, like a bunch of Susuwatari (from My Neighbor Totoro, also my all time favourite Studio Ghibli movie) except in purple. 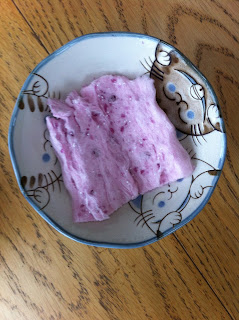 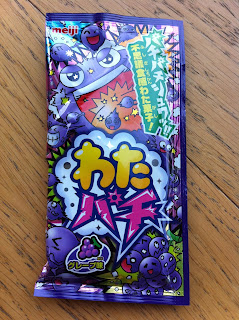 Japanese BBQ Scones
The mini Japan Crate magazine that came along with the crate said that these scones were better than Cheetos. I was a little skeptical at first, but oh were they right. Except the aftertaste was a tiny bit sweet. And they also should be called spare ribs flavour, because that's what they taste like. Also, I found the cat on the left side on the wrapping really cute (she was also eating BBQ Scones). My only question is what is the supr creepy creature standing on her right side?! Maybe a cat who ate too many scones and turned the same color as the scones themselves?! Hmmm... The texture itself is Cheeto like and it is true enought to say that the flavour is better than any other BBQ snack. Five snack stars! 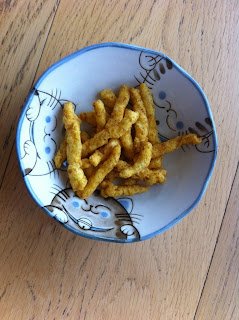 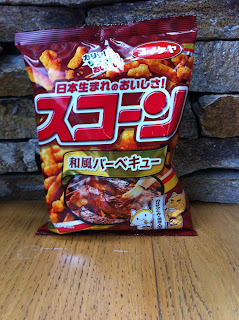 Chocolate Pucca
Due to my Celiac disease I had an expert on all things sweet help me with this one, my nine year old brother. He said that the pretzel itself was sweet snd crispy, while the chocolate (which I scooped out of the pretzel and tried myself) was nutella like chocolate except a little more bitter. I can only say that the chocolate was preety good but I had better, also my brother said that the pretzel was kind of average. He concluded that you would probably be able to take a normal cracker spread nutella over it and it would taste the same. The shape of the Pucca however was very cute like five types of octopus. So, 3 and a half snack stars. 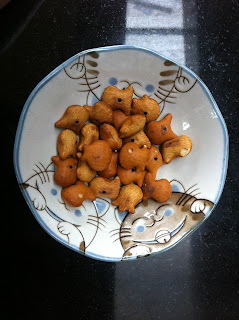 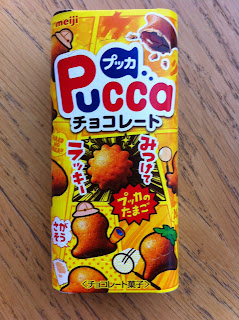 Crayon Shin- Chan Candy
The candy guide said that Crayon Shin-Shan had his own anime show, which was dubbed into 23 languages including English, and that I should check it out. Two minutes later I was browsing through Youtube when I found an episode called: Crayon Shin- Chan"Going Shopping". I think I expected the show to be a for very small kids kind of thing like the Teletubbies for example ( I used to love that show so much when I was like 2 or 3, but it's not like I actually remember what it was about anymore, I just get intense creepy giggling sun, and aliens doing elaborate dance routines flashbacks.) Maybe it was intended for adults like the Simpsons or Futurama, because Crayon Shin- Chan definitely had some PG content, even though my brother and I definitely had some laughs. Back to the candy: the candy looked liked sphere shaped smarties, except there were only five colors: yellow, orange, green, white and pink (the colors of of Crayon Shin- Chan's crayons perhaps?). At first they all tasted the same to me kind of chalky but with a fruity taste, but I kind of felt that there was some minimal difference. To test this my dad suggested that maybe he could give me three pieces of candy one by one, and I would have to determine whether there was a difference while being blindfolded. The first candy tasted like kiwi, the second was more subtle and I told my dad that the first was more sour, the third tasted like the first one. I told my dad and after putting the blindfold off, he told me that the first and third were indeed the same color (white), this meant that there was a slight difference between the candy. I give this candy 1 and a half star because while it was okayish, but the most fun part about it was probably testing whether there was a difference between them. On the other hand, it was also my least favourite candy. 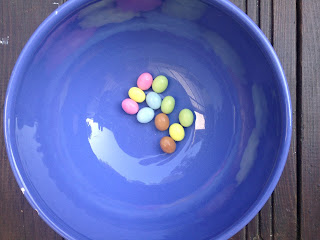 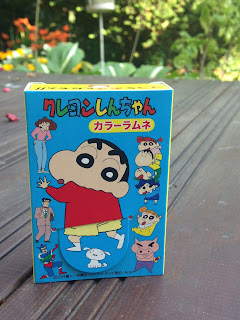 Wow, Such Banana?!
Yes, Such Banana! I did like it a lot it just didn't actually taste too much like banana. The filling tasted like marshmallow fluff and there was a tiny bit of chocolate, although there was a lot less than shown on the cover. The chocolate had a banana tinge to it, but it mostly tasted like very sweet vanilla. Not bad though, four stars. 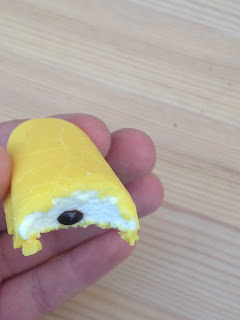 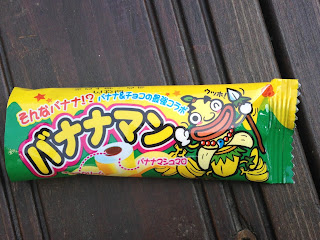 Soy Sauce Pretz
My taste buds got very confused here! First I thought that this was supposed to be a salty snack as it had soy sauce inside, but then it got a turn, and it got sweet. Then you get this weird aftertaste which is something in between. After you get used to it you can actually really start to enjoy it! The only reason I'm not giving it five out of five stars is that I keep changing my mind about it, because I never ate anything similar before, it's like eating a soy sauce cracker and suddenly it's honey! No wait, it's soy sauce again! Four snack stars! 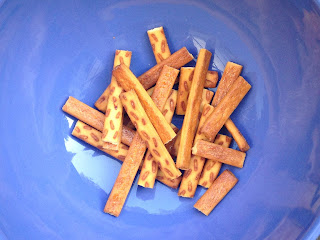 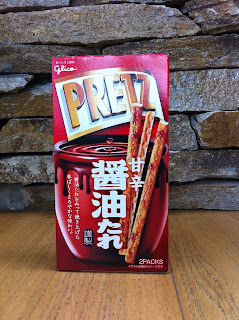 Chocorooms DIY
Completely honestly I had never had Chocoroms before doing this DIY kit, so I can not actually say whether or not it tastes like the original, but what I have to say is that it was way to creamy for me. However making it was so much fun! The kit included a tiny mushroom shaped chocolate form, three chocolate tubes each filled with a different type of chocolate (strawberry, white and milk chocolate), and lastly a tiny packet of about 18 biscuSince the instructions were in Japanese, the booklet had the same instructions in it except translated to English. First, it said to soak the chocolate in warm water until melted. There were two problems with this step: number 1, I tried pouring warm water from the tap into a bowl and then dipping the chocolate tubes inside it (even though, since there was air inside the choco tubes, they were lighter than the water and partly stayed on the surface of the water which meant I had to push them under the water with a fork) but I could tell the water wasn’t near warm enough to actually melt the choice tubes. This meant I had to put the kettle on and then pour boiling water into a bowl, then wait for it to cool down just enough so that it wasn’t boiling but still pretty hot to make this work. Number 2, after actually having the choc in the hot water I realized I had no idea how to find out when my chocolate was melted or not, since it wasn’t like it said the exact amount of time it should be dipped in water on the label. This meant, I ended up scooping the choco tubes out of the water with a fork (so I wouldn’t end up burning myself) approximately every four seconds. When I could (kind of) see that the choc was melted I snapped off one end of the tube and started filling the forms with the melted chocolate tasting as I went. While doing this DIY kit I was actually at my aunt’s house, so I decided I would also let my cousin and my brother try to do some Chocorooms to see if they liked it. They both loved it, except the chocolate kept mixing with the other chocolates because it was still a little runny due to the melting part. We made some mushrooms with and without the biscuit part (so I could try) and then put it in the freezer. I’m not even kidding when I say that the chocorooms were done under 7 minutes. I took them out of the freezer and (easily) by pulling at the biscuit part pulled them out of the forms. They and the process ended up looking like this: 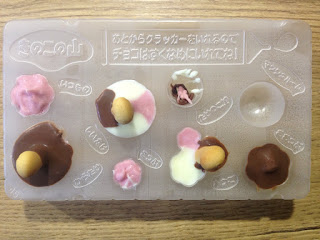