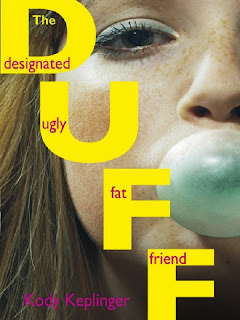 Meet Bianca. Hamilton High’s resident duff. Apparently.
Seventeen-year-old Bianca Piper knows she’s not the hottest girl at school, but when school jock and man-slut Wesley casually refers to her as a DUFF- Designated Ugly Fat Friend -the gloves are off! But then before she knows it, Bianca finds herself in a secret enemies-with-benefits relationship with Wesley. If there’s a thin line between love and hate then Bianca has crossed it. She just never thought she was capable of breaking anyone’s heart.

The Duff is about Bianca, an independent sassy teen who doesn't believe in real teen love. Except maybe Toby… He’s smart, cute, and extremely polite. It’s everything one would want in a boy. But she constantly falls for Wesley, a man-slut and total idiot who calls her a designated ugly fat friend. She doesn’t understand, but she soon realizes that being with him helps her forget. Her alcoholic father, and a motivational speaker mother that wants to divorce him and keeps running away from reality (like Bianca) by traveling.

I have a lot of mixed feelings about this book. Sure the writing was great. I wanted to keep reading and find out who Bianca would end up with, but it was not one of the better YA novels out there. And, also Wesley is a pig, so why does it seem like it’s all overly dramatic and Bianca ends up kissing him in the end, even though he called her ugly and fat?! That seems like abuse, not romance… But he does change in the end to the better and it all ends well…(insert cliché comment) That, however, doesn't mean Bianca ends up with him right?;) Now you have to read it… Bianca Piper is a great main character, she’s honest and probably one of the realest YA characters well… ever. So in conclusion, guys if you really have nothing better to read this book is good. I don’t regret buying it (always a good thing), but I could buy better for the same amount of money. Loved the witty dialogues, though, worth reading if you have nothing better. (Argh hate repeating myself to make a point!) 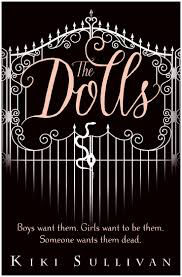 Title: The Dolls
Author: Kiki Sullivan
Publisher: Usborne
Publication Date: 2015
Genre: YA, Romance, Fiction.
Length: 410 pages
Where you can get yours:
Book Depository, Waterstones or Usborne

Peregrine Marceau and Cloe St. Pierre are the dolls.

Impossibly beautiful and dangerously powerful, they hold the city of Carrefour under their spell.

Girls want to be them.

Yet newcomer Eveny Cheval is not so easily swayed by their glamo- until she discovers she is a doll too.

Someone wants them dead. And when a killer sneaks past the locked gates of Carrefour, only the dolls’ combined powers can stop the murderer in their midst.

Eveny Cheval is not your typical teen. The plot of the book starts the day Eveny and her aunt Bea (who has been caring for Eveny since her mother died) move to Carrefour, a small town in Louisiana from New York on the day of Eveny’s seventeenth birthday. That’s where Eveny finds out that she belongs to a group of beautiful witches that protect Earth, they are called the dolls. Her mother was the queen doll, and so is Eveny. But throughout the book she realizes that it might not be something she actually wants…

I just cannot help but point out that this is another great example of how the front cover of the book can be so misleading. I mean it’s not that it isn’t pretty, I really like the beautiful combination of pink and black, it’s just that it looks like something I probably wouldn’t normally read. I read this while I was on vacation, and I have to say that I just didn’t want to stop reading at all. I read it when I woke up, I read it during breakfast, when we were at the beach with my family, just the entire day. No surprise I finished in two days. The first few chapters were very well written, and you get into the story pretty fast. This is just one of those books that are so amazingly vivid you just feel like you're standing there if you know what I mean. I know a sequel called The Midnight Dolls is coming out soon and I really hope to find it somewhere and continue the fangirling. I think that there was only one problem I had with the book and that was the characters. The characters were well written and everything, I just didn’t feel them, not even Eveny. But hey, when I finished I was shocked because I was so into it, I didn’t realize I was almost done with the book. So, highly recommended, if you are currently reading it or already have, please comment down below and tell me what you thought.

Posted by Unknown at 6:58 AM No comments: