The Carrier by Anne Tibbets 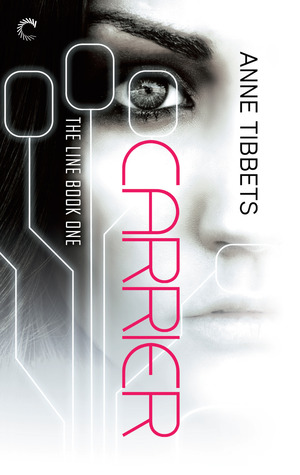 Twenty-two -year-old Naya has spent nearly half her life as a sex slave in a government institution called The Line. When she’s kicked out after getting pregnant with twins, she’s got no way to earn a living and a horrifying choice to make: find someone to replace her, or have her babies taken in her stead.

A doctor with a history of aiding ex-Line girls, Ric Bennett, wants to help. He runs a team of rebels that can delete Naya’s records and free her forever. But when The Line sniffs out his plan, things get bloody, fast. Naya means more to them than just a chance at fresh faces—her twins are part of the government’s larger plan.

As they hide from government search parties, Ric comes to admire Naya’s quiet strength. And Naya realizes Ric might be a man she can trust. If they make it off the grid, they could build a new life. But first they’ll have to survive the long, vicious reach of The Line.
This book was a lot of fun to read. I wanted to read it due to the fact that it sounded very much like Only Ever Yours by Louise O’ Neal. Which if you have been following my blog, you know I absolutely loved. I’m happy to say it didn’t disappoint and while I was worried about the fact that the romance might end up a little cheesy, it was actually okay despite being just the tiniest bit cheesy at the same time. I think it was a good read and I recommend it to anyone who just wants to read something really fast, in a day or two, in intervals or short sittings since you nearly immediately get sucked back into the story.

What I like was how vivid the characters were, each had an actual personality which is hard to create mainly in books. Towards the end there was also a lot of tension, and another good thing is that you have absolutely no clue how the book is going to end since you don’t even know how it could end. Some parts were a little predictable however at the same time stayed true to the story, plot, and characters instead of having an unpredicted but very confusing plot twist.

So to sum up the key points: