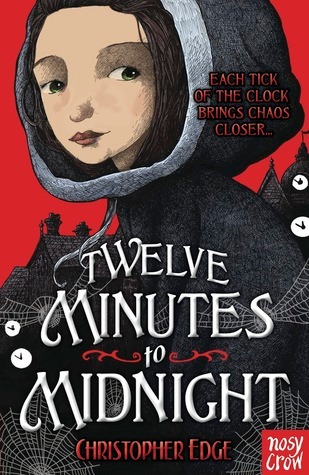 
Length: 253
where I bought mine: Bought for me as a wonderful gift from Amazon
Back cover:
It’s 1899. Every night at twelve minutes to midnight the inmates of Bedlam, London’s notorious hospital for the insane, rise from their beds and begin scribbling strange words on any surface they can find- scraps of paper, the walls of their cells, even their own skin.
What can it mean?

Penelope Tredwell, thirteen-year-old owner of the bestselling magazine, The Penny Dreadful, is intrigued. She’s always seeking sinister stories to fill her magazine’s pages but she’s never encountered anything as chilling as this.

Soon she’s ensnared in a venomous plot, and Penny realises that this isn’t just a story, it’s the future.

And the future looks deadly…

Everyone has a couple of favourite books, and this is one that definitely belongs to my personal favourites. It has everything I like in a book: a strong heroine and a set of great characters, a mysterious and wonderful plot, and lastly an unexpected ending. I really do not like horror, or extremely scary books, but this was really not as scary as I expected it would be, and I thoroughly enjoyed every chapter. I do not like re-reading books, because I know what it is going to end like, so I always try to make the best of it. However, I re-read this book about four or five times and I still enjoyed it, mainly tracing back my steps and looking for the clues over again. The thing about books like this is that every person feels different about them, since this book is completely different than any other of my other favourites. To write a enjoyable book, you must have strong main characters and Penelope was perfect. She reminded me a lot of Hercule Poirot (definitely my favourite detective) since she seemed like an adult and still, there was something childish about her. By childish I do not mean acting like a small child, I mean she acts like an adult, and you don't realize she is actually only thirteen until she is scared or insecure.

Penny is a thirteen and is very smart for her age, and actually has her own magazine which publishes creepy stories she makes up. However, she has to keep secret the fact that she really is still a child, because no one would buy the magazine if they knew she was only thirteen. That is why she hires an actor to play her and she calls the author of the magazine Montgomery Flinch. While she writes the stories, he acts as her and performs live on stage. Everything is fine, until Penny sees a news article talking about a near by hospital for the insane called Bedlam in which people wake up in the middle of the night and scribble predictions of the future everywhere. The problem is that everyone thinks that since they are all insane, they are making it up. In reality they are real predictions for example one talks about television, and another talks about “huge metal birds” or airplanes. To the people living there it seems crazy and possibly very dangerous. |The story is set in the Victorian times, and the setting is and seems very real. Some of the characters are even victorian writers like Charles Dickens, and Rudyard Kipling. It is a must-read for anyone who get’s bored very fast with a book and want’s a good story and a fast moving plot, and people who like to enjoy every moment of their book alike. I very recently found out that two new additions came out to this brilliant book, and sadly they aren't avaible in my country just yet. But, as soon as they come out in a year or two I will definitely read and review both.