American Horror Story
Finding out about Netflix finally coming to countries other than the U.S. I immediately decided to start a free one month trial. About five minutes later I was completely hooked and amazed at how many shows I could not previously watch were there. I started a couple of shows to see how it would go and what I would like and my favorites were Orange is the New Black, American Horror Story, The Big Bang Theory, and How to Get Away with Murder in no particular order (since I couldn’t decide). I also watched a couple of really good and really bad movies. Although, my favorite movie was probably Catch Me If You Can (with that in mind please finally give Leonardo an oscar). But one show that I particularly liked was American Horror Story. I have heard a lot about it previously and it was even aired in my country but the dabing was so terrible I stopped watching five minutes in. I was in Germany this week (and for some reason the Netflix selection of movies was different) so I watched a couple of Murder House episodes which turned into binge watching the entire season 1 in a day. Despite Murder House not being very popular I really liked it and I feel that there weren’t any slow paced moments. I also started Asylum which I thought was also really good, yet I formed this relationship with the Murder House plot and characters that Asylum wasn’t really able to re-create. Murder House was therefore definitely my favorite (so far) because you left every episode on this note of not knowing what will happen next and needing to start the other episode following it ASAP. There were many plot twists but somehow you never got lost in them which would resemble a telenovela. If you have the time and aren’t sure whether you should start watching AHS I highly recommend you to, since it’s just that type of show you can watch the entire day and not get bored of. Not only was the plot very cleverly written but you actually cared for the characters which I know is very hard to do sometimes. I particularly liked the character of Moira, Vivienne, and Violet, while in Asylum I don’t particularly care for any of the characters. Moving on… 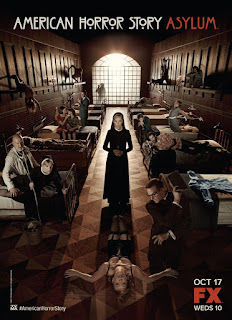 Djeco
I am very surprised that this isn’t more known than it is. Djeco is a French company that makes amazingly creative and sophisticated toys known for its creative project boxes. You basically buy a small box which includes the materials and instructions on how to build or make something you usually would have a hard time finding the materials for or making yourself. Even though the toys are mainly targeted for kids; from very small children to young adults, there are certainly many projects that would interest an adult. I love receiving Djeco craft boxes for Christmas or my birthday because there are so many the chances of getting the same present are unlikely. Some of my personal favorites are painting elegant and fashionable silk scarves, using patterns to enhance an already sketched design, painting Japanese styled portraits of geishas, nature and animals. I think that one of the reasons why I like them so much is because my family and I travel a lot and instead of packing a billion pencils and boxes for crafts in the car, you pack conveniently pack one small Djeco box. Also, most of the boxes come with these very good quality two-sided markers that are very hard to find elsewhere, and have this beautiful bright pastel color. Anyways, I recommend you to check it out and I’ll leave a link right over here: www.djeco.com. Millie Marotta’s Animal Kingdom
About last year I really got into adult coloring books. I have always liked drawing and coloring stuff in, but I quit at ten when they got too easy for me. Hmm… Actually let me rephrase that they didn’t necessarily get too easy, there just wasn’t enough to color in. I guess, they weren't intricate enough. Anyways, before receiving this as a gift, I already had one copy which I half-heartedly colored in (I bought it myself when I was 11) and I’m not going to lie when I say that the first time I had her book I didn’t really get into it as much as I did when I got a new copy from my aunt this Christmas. I’m about halfway through, but I like it a lot now, taking it with me whenever I travel somewhere. I actually even took it this week when I went to visit my aunt in Germany last week. I think the illustrations are very neat but still there is a sense of chaos (in a good way).

Aussie Shampoo and Conditioner
I was recently introduced to Aussie when a friend of mine recommended it to me due to my dry hair, when a different blogger said that it was supercalifragilisticexpialidocious. I really like not only the pretty pale blue color (which doesn’t really make a huge difference but is still pretty) and the amazing Australian blue fruit and flowers smell (which does matter). My hair was always  really dry and both the shampoo and conditioner helped a lot. Another tip: If you have extremely dry hair ends, what I do is I take half a pea sized amount of non- perfumed hand cream and gently rub it into my ends. The only thing is that you probably shouldn't do this immediately after washing your hair because you risk   the fact that if you put too much in, your hair might look greasy. Anyways, here is my favorite shampoo and conditioner (so far).

Marc Jacobs pale pink Natasha Cross body bag
Before I got this bag for this year’s Christmas none of my bags were “designer”. And with that in mind it’s not a bad thing, I really like some designer bags but I would never buy a bag just because it’s designer. I mean I can honestly say I love all my book bags and purses each commemorating a different part of my life, or memory, or country I visited. Quite honestly I still wear all my bags depending on the occasion but I just don’t have the urge to throw a single one away (because 1. why would I, they’re awesome? and 2. They’ve been given to me by one of my loved ones which were thinking I might like a nice bag (I do) or I even bought it myself. The reason why I chose this particular bag is because of how convenient it is for most things and in-the-city activities. Not only is it a stunning pale pink (one of my many favorite colors including pastel blue and purple) but it’s not big and therefore heavy and inconvenient, but also not tiny and barely able to hold any of my things. Sure, it looks tiny, but have you ever encountered a hand bag that was able to hold: A hot pink Guess purse, an eyeglass case with a pair of black detective styled glasses, a notepad, a pair of bobby pins spilled throughout, and a (very) small book? I have, but none were this pretty. I always wanted a bag that  would fit all my stuff in including my book for the week (and in the worst case scenario at least my kindle) and would also look presentable in case of a birthday party or a party overall. 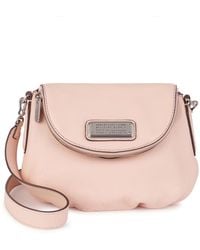 *(aka a belief that buying things that your favorite youtuber/blogger likes will make you more like them.)
Posted by Unknown at 5:59 AM